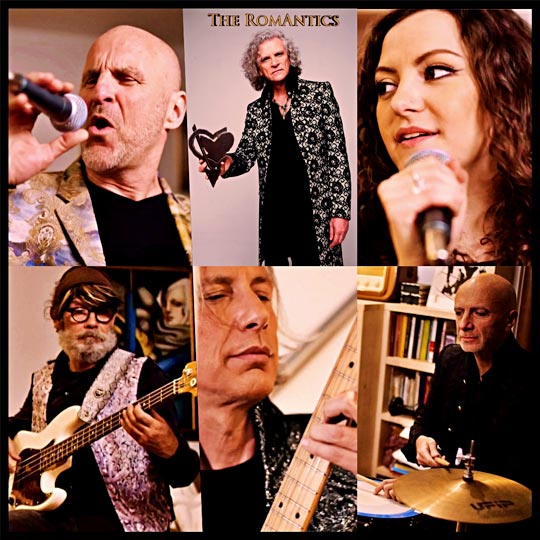 THE PERFECT SOUNDTRACK TO MAKE YOUR WEDDING UNFORGETTABLE

The Romantics is a band of professionals but above all friends who have been collaborating in the music for a long time and with 20 years of experience in live performances.

They decided to start this project to color with magic unique events such as weddings.

The Romantics want to take on this challenge to offer something different. In a concept: an unforgettable day in the life of the spouses and their guests, with special music that always makes moments more emotional. So not just simple musical entertainment but also moments of poetry, spectacle and interaction with the bride and groom, stars of the party, as well as with all the guests.

But who are the artists involved in The Romantics? Let’s get to know them better.

The male voice is Vittorio Centrone. He is a very special singer-songwriter. About ten years ago he produced a multimedia show combining music, theatre and comics in which he plays his alter ego Lemuri the Visionary wearing clothes by fashion designer Cleofe Finati. With this show he has performed in Italy and Europe and recently released his new record entitled Viaggio al centro di un cuore blu (Journey to the centre of a blue heart). Vittorio is also the male voice of the very famous Italian-Romanian Hit Dance Dragostea Din Tei, known and danced all over the world.

The female voice comes from Rome. Ambra is a young singer, bright and talented. Sweet and spontaneous, she garners unanimous acclaim every time she performs. She is also a dancer and this allows her to hold the stage with uncommon ease. She currently performs as a vocalist in Rome’s most popular clubs.

Stefano Refolo aka Steven Gust is a pianist, singer and above all a great entertainer.In the 90s he was one of the most prominent figures on Roman nights with his band at the time Prodotti Atipici, which included some of the best-known musicians on the Italian scene. Thanks to his musical knowledge and his friendly madness, fun is guaranteed.

On guitars is Stefano Tedeschi, right-hand man of the italian singer Annalisa Minetti for the past 20 years. He also boasts collaborations with Aida Cooper, Gatto Panceri and Paolo Meneguzzi.

Fabrizio Cascione plays bass guitar and is known with the nickname Fasella, not yet clear why.Together with the drums, he is the real driving force behind the band.He has collaborated with many italian artists including Luca Barbarossa, Mietta and Gemelli Diversi. He is currently part of the Little Tony Family project.

Dulcis in fundo the band’s drummer and music producer: Max Minoia. The biggest names in italian pop music have passed through his Biscuit recording studio in Rome. After collaborating as arranger and author with Gianni Morandi, he recently participated in the production of Renato Zero‘s last two records.

In short, The Romantics have all the necessary ingredients to accompany the most important event of those who, by promising love, wish to make unforgettable the party that will crown their desires.