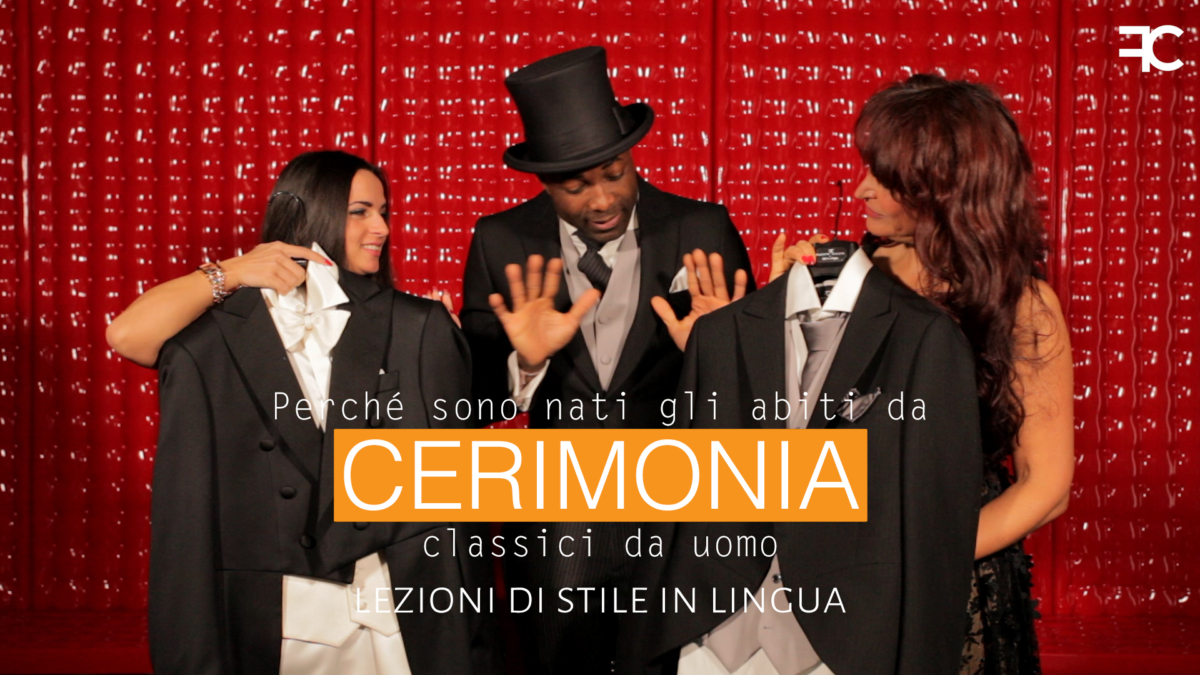 MEN’S CEREMONY SUITS. DO YOU KNOW THE CLASSICS?
The dandy man knows it: The male dress code for MEN’S CEREMONY SUITS AND men’s formal wear has always been tied to etiquette. Cleofe Finati and its 3 dandy style experts reveal all the secrets to extricate themselves from the classic models and to know the differences in order to respect the rules … or to be able to break them! No excuse … 3 languages ​​to be perfect dandy with a beautiful ceremonial dress! The classic models of the masculine elegant dress are essentially 4: the cutaway(morning coat in the UK) , the semi formal morning coat, the smoking or tuxedo and the tail, to which the classic three-piece suit has now also been added.

Our 3 dandyssimi style experts help you with keywords: for the day, cutaway (morning coat).

A distinctive feature is the gray or anthracite jacket, short at the front with a single button closure, and with two rounded tails at the back. The pants have a straight cut, without turn-ups, and can be in various shades of gray or in a pearl gray pinstripe fabric with a black line. The gilet, with five or six buttons, is also gray according to tradition, even if the dandy man now loves to combine colored silk vests with damask patterns. The tie is a plastron, while both the bow tie and the bow tie are prohibited with the tight. The shirt, with a diplomatic collar and cufflinks, is strictly white.

Granted to the most fashionable dandy always for the day: The semi formal morning coat. Recognizable by the jacket, indispensable in the men’s formal dress, which does not have two tails, but has the same length as a traditional classic jacket and two-button closure. Cleofe finati has designed a timeless and beautiful best seller!

Sensual, beautiful and to be used only after 18:00: The tuxedo.
For the capricciose dandy the choice of the outfit is usually black or blue, but also white. The distinctive features of this formal dress are the single-breasted jacket with a single button closure, or double-breasted jacket with four-button closure; the trousers, always black or blue even with a white jacket, have no cuffs. The dandy man will immediately notice the satin inserts applied on the lapels of the jacket, and sometimes even along the outer seam of the trouser leg. Too capricious with cleofe Finati … too made in Italy! The shirt, even in this case strictly white, is simple, with lowered collar and cuffs of musketeer closed by twins. The fundamental accessory that distinguishes this model is the bow tie, in silk or satin and hand-knotted ….! 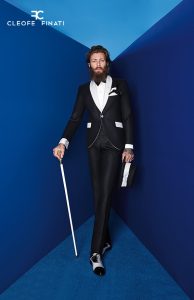 Very high level … for the dandy with an almost touching elegance … it is the tail. It is the classic model of the most elegant MEN’S CEREMONY SUIT AND men’s formal wear ever! also for this reason, among the the classic model, less and less used. The jacket is black with satin lapels. It has no closure, it is short at the waist and behind it closes with the classic dovetails. The trousers, always black, have no folds or lapels, and have two satin stripes on the outer seam of the trousers. The vest has a low buttoning with three or four buttons and is necessarily white, as is the bow tie that completes the dress

The only rule to respect, therefore, remains in the end only one: all the men present at the ceremony should wear the same model chosen by the groom. But even this rule is now forgotten! And always take a look at the invitation: BLACK TIE OR WHITE TIE are synonymous with DRESSCODE with SMOKING OR FRAC!

Thanks to CLEOFE FINATI’s fashion experts we have become fashion experts in the classics MEN’S CEREMONY SUITS AND men’s formal wear…for the dandy who wants to be glamorous in his 100% SMOKING MADE IN ITALY.

The culture on the classics MEN’S CEREMONY SUITS AND men’s formal wear is a must for the dandy. Cleofe finati and its 3 experts give you a brief overview in 3 languages. Let’s get it started! The tuxedo and more correctly the smoking jacket, was a chamber jacket used by British nobles in the evening to enjoy a good cigar in front of the fireplace and a good bottle of brandy, to avoid impregnating their clothes with the smell of smoke and thus giving boredom to his lady once back in the boudoir. Useful, beautiful and delightful … what a dandy man is the true gentleman in his perfect MEN’S CEREMONY SUIT!We will find out by following our experts that in 1865, Prince Edward of Wales commissioned Henry Poole with a short smoke jacket. To fulfill the requests of the future sovereign, the tailor of Savile Row just cut the dovetails from a tailcoat to create what will soon be there. The ceremonial dress we know as a tuxedo. It was then exported to America, in 1880, by the young dandy Griswold Lorillard who, wearing it continuously at the Tuxedo Club of Cinnaminson, New Jersey, had it enter the local clothing with the name of Tuxedo.
The dandy man is a practical man, and for him the rules to be respected and with a smile to break are:

Color: The tuxedo is born black. It grows black. And it will die black.
Only two colors are accepted as an alternative:
midnight blue, created at the behest of the Duke of Windsor, used by Avv. Agnelli, brought back into vogue by Tom Ford;
white, used only for the jacket, with the possibility of use only in summer or in tropical countries for outdoor receptions.
Jacket: Single-breasted or double-breasted, it must not be too tight, but it must still shape the body.
To be used in classic length, it is forbidden to wear it short.
The shoulder is normally English, therefore structured. Recently the unstructured, more modern shoulder is also accepted. Never wear a shirt shoulder, with the Neapolitan mappine, which is more untidy.
The lapels are black in satin, and are lance or shawl, the latter more similar to the English original.
He is always worn buttoned, except in the case when he is wearing a vest.
The buttons are covered with the same fabric as the dress, and normally the jacket has only one.

Trousers: BLACK.
It has a side band of the same fabric as the lapels, called a gallon, and does not have belt loops.
They come with a pair of braces, black or not too bright colors. To cover the attachment of the risers, the band was used, which also replaced the waistcoat on warm summer evenings. Now the band is going to disappear more and more, thus leaving the straps on display.

Shoes: Originally they were used very low-cut “slippers” in black velvet or in glossy black, always black, surmounted by a silk bow, also black.
Now they prefer smooth shiny black oxfords, without hammering or fretwork. Alternatively you can use classic black mirror polished oxfords. It is strictly forbidden to use any other color.

Papillon: To be tied. NEVER use the pre-knotted one, a symbol of bad taste.
The fabric is a satin or a silk, exclusively black.
In fact, on the invitations it is expressly written black tie to indicate the black bow tie. The black tie is therefore unpredictable.
The white bow tie is worn only with the tailcoat.

White shirt.
Cotton or silk, but strictly white and with cufflinks. 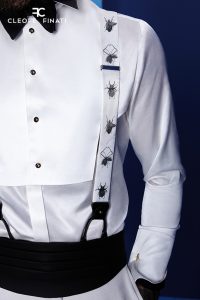 Normally with double cuff, it can have a pleating on the front to fill the empty space left by the bow tie on the chest.
To be used smooth when wearing the vest, it has mother-of-pearl or twin buttons, which can be removed before washing.
The collar can be more closed to the Italian or it can be worn to the diplomatic one, with the flaps downwards brought under the bow tie. Serious mistake is to bring the bow tie out of the tips of the diplomatic neck.

Accessories:
Socks: Black, in scotland thread, long at the knee and thin, without ribs or designs of various kinds;
Pocket handkerchief: puffed if in silk or folded in 3 points or bar if in cotton;
Boutonniere: to be worn as an alternative to the pocket handkerchief, it is red in color, more specifically a carnation. The white flower is reserved exclusively for the tailcoat;
Watch: if you wear a vest then you will use a thin and not bulky pocket watch. If you prefer the wrist then it will always be fine and not ostentatious.

Context: Use only when necessary. If specifically requested by the invitation (BLACK TIE). Being the only one wearing a tuxedo can be embarrassing.
Use appropriately, learning how to wear.
Use only from 18:00 onwards.

And now … you just have to not miss even a video of our dandyssimi fashion experts and … tell us which tuxedo is your favorite and what formal dress you have in the wardrobe!