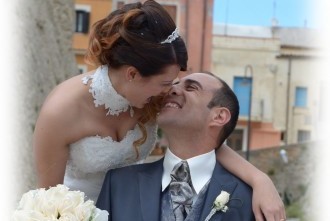 A total look totally reinvented from the jacket of Charlie Chaplin that intends to present in perfect Cleofe Finati style the emblem of the modern Charlot, the suit of the Fashion avant-garde line with Dandy inspiration of the early 20’s twentieth century, purchased by the groom Giacomo Bottinelli, at Via Zannotti Sposo, Cleofe Finati by Archetipo store in San Severo.

One of the most successful creations of the 2015 collection.
Look at the line that outlines the figure and wraps it, the line that disappears on the front of the jacket, which rests on the body, narrow hugging shoulders, high narrow armhole, a “jacket sculpture” that sculpts. Look at the poetry of the back, “the design of the lily”. Pleats that become splits, cuts that become pure craftsmanship and, at the same time, “emphasis of the figure”.
Now, let’s look at the design of the brocade, paisley that turns into a 2015 flower, that from a pattern becomes raised “embroidery”, this embroidery becomes a trace of silk light on a bed of taffeta… the colour “grey cloud”, the colour of a thoughtful and melancholy sky, which is no longer the limit of the creation itself, the colour of success. Noble expression of absolute elegance; note the sweet, soft mix with ecru.

An expression of fashion, elegant, pure artistic creation dedicated to a spirit of “fashion and exclusivity”.