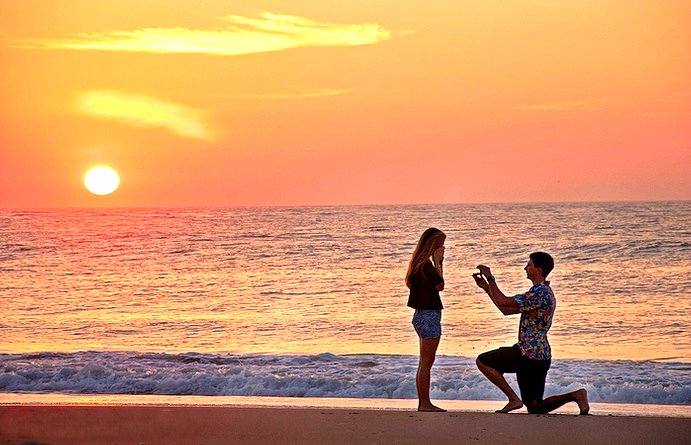 Engagement ring: history, tradition and guide to the choice

The engagement ring is an important symbol of love, to donate it represents something unique and not obvious, because it is a true love pledge that the groom gives to his beloved in the sight of the wedding. Tradition wants that the bride wears the ring on the left hand, but have you ever wondered why, or what are the history and the tradition of the engagement ring?

It is the Roman culture that spreads the idea of ​​wearing the ring on the ring finger of the left hand, since it was believed that from it started a vein directly to the heart, the so called “vena amoris”. But this is not the only argument, because there is another that derives from an ancient rite of the Catholic liturgy, which occurs when the celebrant, touch the first three fingers of the left, coming to put the ring in the fourth finger of the same hand.
Since ancient times the gift of a ring is a promise of love, tradition that is firmly established in Roman culture, but already between the Egyptians and the Greeks it was in vogue the use of consecrating the future wedding with a pledge of love that the boyfriend gave to his beloved.

The tradition of giving a diamond engagement ring dates back to 1477, when Archduke Maximilian of Austria gave Mary to Borgondia a gold ring topped by a brilliant promise as marriage, custom that has remained alive through the centuries
Tradition says that is bad luck to buy at the same time the engagement ring and the wedding rings. In the event of a broken engagement, the label wants the return of gifts and letters, but if it is the man to break the relationship, the woman is allowed to keep the ring.
Engagement rings could be are the classic Solitaire, the Riviera or the “Trilogy”, consisting of three diamonds symbol of “yesterday, today and tomorrow” . However, are many and many the precious stones as to embed in an engagement ring, each of which contains the unique and deep message, and in addition to the most widely used diamond, symbol of strength, there are other gemstones that you can embed in the ring, such as:
– Sapphire, symbol of loyalty
– Ruby, symbol of burning love
– Aquamarine, symbol of lasting marriage and happy
– Emerald, symbol of hope
– Beryl, symbol of strength of the bond of love
– Opal, symbol of sincere love.