Archetipo wins the second episode of “Four Weddings in Italy”

Cleofe Finati groom collections by Archetipo triumphed in the tv show Four Weddings in Italy! The tv show is the Italian version of the popular American format “Four Weddings” and is broadcasted on Fox Life.

The protagonists of the second episode were Michele Irpino and his bride Ada Princigallo, from Foggia (Italy). For his wedding, Michele wore a wonderful suit of the Cleofe Finati 2014 Collections by Archetipo. The dream ceremony allowed the couple to win the episode, also thanks to the choice of wearing a unique Cleofe Finati creation by Archetipo!

The Archetipo Team had the pleasure to interview Ada. We asked her to tell us more about the day of their wedding and some stories on their participation in the tv show “Four Weddings in Italy”…

Ada, can you tell us what got you to participate in the tv show and go “on air” on the day of your wedding?

“It all started quite for fun! An ad was published about the tv show on Facebook, inviting everyone who was interested to email the production staff. I sent them a message telling them how Michele and I met, our love story and indicating the date of our wedding. They wrote us back, we went to Rome for the casting at Magnolia studios and we have been chosen!”

Did you have fun?

“Yes, it was definitely fun! And everything was so absolutely real, unlike what some say about the fact that weddings in tv are faked…It was an awesome experience!”

How does it feel like being filmed by tv on the day of your own wedding?

“There was a little bit of tension – after all we had got microphones on us for the whole day… But for the rest of time the tv crew was very discreet, we never felt oppressed by cameras. In addition I was experienced at it as I took part in the previous weddings of the other three couples in the tv show. It was harder for Michele to get used to it!”

What have been the comments on the Cleofe Finati suit worn by the groom?

“Everyone appreciated the suit! And Michele kept receiving compliments also after the tv episode. Compared to the other three grooms Michele was something completely different!” 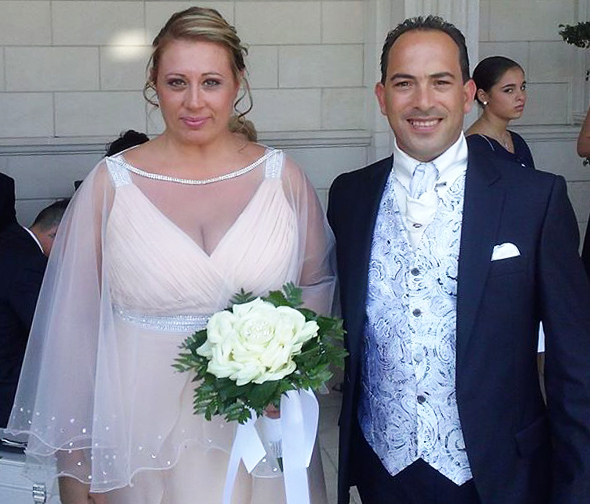 What a magic suit the groom wears! Let’s have a closer look at the waistcoat: it is made of over-printed jacquard textile, with a cashmere drawing which was magnified to get a blurry effect. This tailoring is highly innovative and it distinguishes Cleofe Finati 2014 Collections by Archetipo. The research is a highly researched garment, which is expression of the purest passion for excellence! This is why Cleofe Finati Collections by Archetipo are so special…

Michele bought his suit at Boutique Specchio, official retail store of Cleofe Finati Collections in Cerignola (Foggia – Italy). The store is extremely happy for the win of the couple! We have asked a few questions also to Vincenzo Specchio, owner of the store, and Cristopher Marinaro, sales attendant.

Vincenzo, you assisted Michele in the store when he bought his suit. Can you tell us how was it?

“The groom – who comes from the world of dance – literally fell in love with his Archetipo suit. He considered it special, different from the uniformity of the other brands. He immediately liked the suit, all at once. After all, all our customers who choose Cleofe Finati by Archetipo love the line of these collections, which is a line profoundly different from what you see around.” 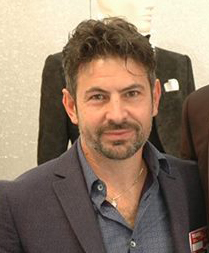 When Michele was in your store, what emotions did he and his family feel?

“Michele came to the store with his mother and sister. Also Ada, his wife, was in the store but she was in the bride fashion section. The couple didn’t want to reveal each other which dress and suit they chose until the day of their wedding. The groom wore his suit in the fitting room while his mother and sister were waiting outside for him. We dressed him up, including all accessories. Then the following events happened: the wedding song played, the groom went out of the fitting room, his mother and sister started crying when they saw his suit! He was so excited. «This is my suit», he told me. «I can try on more models, but I’m sure I’ll get this one! It’s wonderful.»

Cristopher, you went to Michele’s house on the day of his wedding for the morning dressing. Can you tell us about that moment?

“Since when he tried the suit on in our store, Michele felt the suit as ‘his own’… And on the day of his wedding he was fully convinced about his choice. He was happy and you could see it from his expression He was so excited, I could hear it from his voice while we were talking… But he was not nervous, just really excited!”

if you missed the broadcasting of the second episode of “Four Weddings in Italy” you can watch it now in the video below. Congratulations once again to Ada and Michele from all the Archetipo Team!

If you too wish for a dream wedding don’t hesitate to contact Boutique Specchio and discover the Cleofe Finati creation best suits you.